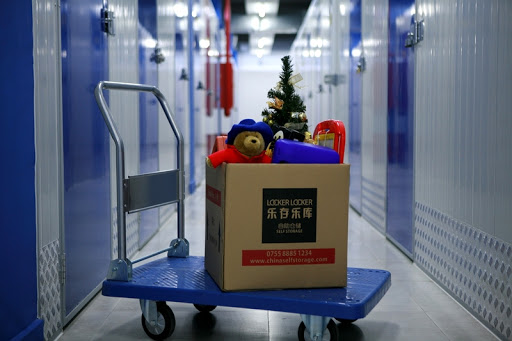 The travel gods smiled upon me. My bag and I both arrived at the same airport at the same time, traffic to the hotel zoomed along, and the line for hotel check-in was shorter than the TSA's.
As I made my way to my room, I observed this hotel's unique (and somewhat goth) decor: elegant, comfortable... and dark. Dark! Dark! Dark! The walls were black, the furniture was black, I even think the water was black - but I couldn't tell because, well, it was so DARK. (And I'll let you guess what color the ballroom floor and the staging were... )
The meeting began and halfway through my presentation, I stepped forward to make a dramatic point... and walked right off the front of the stage. (Picture Wile E. Coyote stepping off a cliff.)
As you might have guessed, the black carpet and the black stage floor merged visually, leaving no hint that there was a drop-off there. The audience gasped, wondering (in the dark) if I was injured; then they held their collective breath. While the stage was only four feet high, the fall seemed to last forever. Thoughts raced through my mind. Would I bust my butt? Break my neck? End-up paralyzed? Is there a lawyer in the house?
Wham! I landed flat on my back. The wind was knocked out of me, and for several moments I was unable to breathe - my mouth gaped open and closed like a fish out of water. The audience sat in stunned silence.
Being a long-time speaker, I'd maintained a death-grip on the hand-held microphone. And then I pulled out the "saver-line" that I had tucked neatly away in the back of my mind for just such an (unlikely) occasion. I sat up, looked at the audience and said, "And now I'll take questions from the floor."
The audience laughed with relief and applauded as I climbed back up onto the stage. I refused to let them see how badly I'd bruised my ego and my bottom! Some members of the audience thought I'd actually done it on purpose! ("Oh, she's so clever!") Good grief! But like a magician who never divulges "how it was done," I didn't tell anyone that it was "planned spontaneity" that saved my... butt.
Planned spontaneity is a great little technique for sales professionals. Hold on, hold on - I can hear several of you in the back, murmuring, "I don't need any planned spontaneity! I'm witty, I'm quick, and I perform best under pressure." Hey, good for you. Now get over yourself and take a tip from one of my teachers in the world of Improv: "You need to be sharp and quick to perform Improv, but you also need to practice. Practice, practice, practice. Only a fool goes up on stage armed only with his 'natural born' talents. Yes, it's possible to 'get by' for a while. But if you want long-term success, you might want to follow in the footsteps of the greats who are brilliant folks like Carol Burnett, Will Ferrell, Bill Murray, Tina Fey, and Chevy Chase."
A novice salesperson often lives on the edge by being only marginally prepared. A professional salesperson expects the unexpected. You prepare responses for sales resistance, right? You'll be doing yourself a big favor if you also prepare for unlikely, and even outlandish, situations.
When the unexpected happens or - heaven forbid! - you make a mistake, humor can be the saving grace. I'm not saying you should just laugh off a serious mistake. However, when used mindfully, humor will decrease the tension, acknowledge the error, and provide some comic relief. Done well, it can also show others that you have the ability to laugh at yourself. The manner in which you respond may actually strengthen your relationship with that prospective client.
If you listen carefully to successful comics and politicians, you'll begin to notice the saver-lines they pull out after a snafu. They've thought ahead and crafted a clever response (probably several responses) should the need arise.
Develop your own potential saver-lines and pair them with your possible blunders. Now practice them. Aloud! Why? Because the goal is to get them well-planted into your subconscious mind. Practicing in your head is good, but practicing aloud is great. By saying the words aloud, you are literally putting words in your mouth! And when you actually say the words, and hear yourself saying them, you are creating more connections, and stronger connections, between your neurons. So when the need arises, your response will come of its own accord, and appear to be spontaneous.
Was this article helpful? Yes -0  No -0  60  Posted by: 👨 Scott M. Johnson